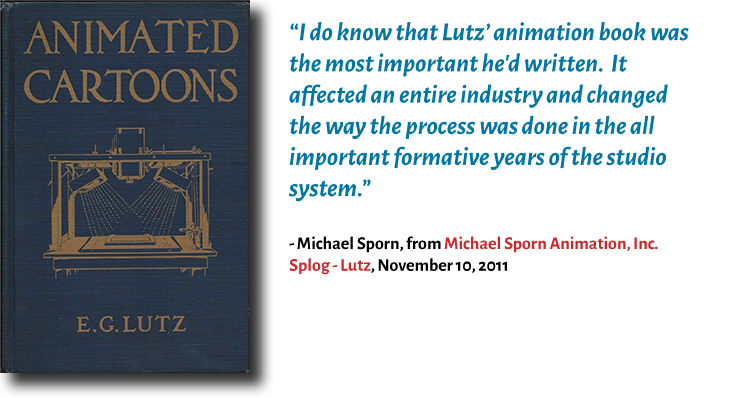 At the age of 52, Edwin published his fourth book Animated Cartoons – How they are made, their origin and development in 1920.

Animated Cartoons came at time when the animation industry was just beginning.  It offered well-thought-out ideas for how animation could be produced.  One of these ideas is discussed below.

At the time the book was published, animated cartoons were being filmed at one foot per second.  Each foot had 16 frames (i.e., 16 frames per second or 16 fps).  For a comic subject, it was typical to use half of a reel, which was 500 feet.  That would result in a cartoon about 8.3 minutes long and would require 8000 frames of artwork.  But creating 8000 unique drawings would be an overwhelming task.  So, Edwin advocated a methodology to have the lowest possible number of drawings needed be made for any particular scenario.  His mantra was to work with an economy of labor in mind.

As Edwin discussed in his book, the chief animator must know how to put components together in an orderly and proportional arrangement.  And, his appreciation of a comic situation must be keen.  Edwin also advocated what we would come to know as “storyboarding” – the construction of a series of sequential drawings in wordless comic-strip form in order to have a pre-production blueprint or plan of the film.

The artists work on a light table, where light shines up from underneath a desk surface with a recessed piece of glass in the drawing area.  There is usually a “gooseneck” type of desk lamp available as well.  Directly above the glass drawing area are posts or registering pegs.  Sheets of paper with corresponding holes to the pegs are slipped over the posts to ensure consistency in paper and drawing registration.  This bottom-lit work area allows the artist-animator to see the relationship of sequential drawings as they decide and plot the movement of the character/object.  Interestingly, as animators become more experienced they are able to flip/roll the drawings as they draw to see the sequence move – like a flip-book.

First, the animator sketches the initial drawing with the characters in a passive position.  The drawing is placed on the light table in the registering pegs.  Another sheet is placed on top, and the animator draws the starting position of the animation.  Still another sheet is added to the pile, and the animator draws the ending (or “extreme”) position of the animation.  These are called “key frames.”  A helper, tracer or “inbetweener” would follow up with additional sheets of paper and draw the intermediate position(s).  Edwin called these “in-between drawings.”  Today, they are referred to as “in-betweens” or “tweens.”

Using the initial drawing on the light table, the tracer would then trace the background scenery on transparent celluloid.  On a separate “cel,” the characters would be drawn without the content of the animated components.

Specialized photographic equipment that utilizes the same corresponding peg system allows each frame to be assembled with the registration intact.  The animation sheet of paper is on the bottom, with the character celluloid and then the scenery celluloid placed on top.  The frame would be photographed and the “cels” reused for the next frame in the sequence.

There were several advantages to this methodology, including that animated movement would flow more smoothly compared to other methods of the time.  This works because of persistence of vision – our brain fills in the blanks.  But one of the key benefits of this process is that each frame could reuse passive drawings on cels and not require the artist to re-draw the entire sketch for each frame.  In addition, less skilled (e.g., lower waged) tracers could do a lot of the work which would free up the animator to focus on other essential parts of the animated cartoon project.  In a production studio, this would reduce the time needed to develop a cartoon while also reducing the development costs.

Animated Cartoons proposes many other practical ideas for studio development of cartoons.  Edwin discusses the movement of  humans, animals and inanimate objects in a variety of ways.  He discusses making animated screen pictures, photographic considerations, and humorous effects and plots.  He even mentions that dialogue should be used judiciously and be kept out of the drawing to make it easy to translate into non-English languages for international distribution.  And he closes the book by advocating that animation and motion pictures be used for teaching — what we would call training videos today.

The Story of Old Glory

In 1918, Edwin created an animation feature cartoon called The Story of Old Glory.  This film was created to commemorate Memorial Day – 100 years ago!  Here is a link that describes this film in more detail:

The Story of Old Glory

Shortly after Animated Cartoons was published in 1920, Walt Disney borrowed the book from his local library in Kansas City, MO.  At that time, Disney was cash-strapped.  Production short-cuts that were proposed in Animated Cartoons were appealing to keep costs down.  It is well documented that this book greatly influenced Walt Disney and that he and his team of animators used the book as a guide in Disney’s Kansas City studio.

In his book The Animated Man, Michael Barrier described Animated Cartoons with the following:

As elementary as the Lutz book was, it still offered a vision of a kind of animation far more advanced than the Film Ad cutouts.  Lutz wrote at a time when animators commonly worked entirely on paper.  They made a series of drawings, each different from the one before, that were traced in ink and photographed in sequence to produce the same illusion of movement that Film Ad achieved by manipulating cutouts under the camera.  Lutz advocated the use of celluloid sheets to cut down on the animator’s labor—the parts of a character’s body that were not moving could be traced on a single sheet and placed over the paper drawings of the moving parts.  Such an expedient (and Lutz recommended others) would have resonated with Disney, who had been so impressed by commercial art’s shortcuts when he worked for Pesmen-Rubin.

There are several books that discuss how Disney implemented many of the ideas found in Animated Cartoons.  Although it does not appear to be documented, it is curious whether Animated Cartoons also influenced Disney in creating the Alice Comedies series (1923-1927).  The last chapter in Animated Cartoons discusses ideas for using animation in the future.  Edwin wrote, in part:

“The kind of stories, with the latter thought particularly in mind, especially fitted for the screen are those of Lewis Carroll.  His “Alice in Wonderland” is a good example of the type of fanciful tale on the order of which animated cartoons could be made for children.”

In the book How to Be Like Walt:  Capturing the Disney Magic Every Day of Your Life, authors Pat Williams and Jim Denney wrote the following about  Animated Cartoons:

Of the Lutz book, Walt later said, “Everyone has been remarkably influenced by a book, or books.  In my case it was a book on cartoon animation.  I discovered it in the Kansas City Library at the time I was preparing to make motion picture animation my life’s work.  The book told me all I needed to know as a beginner – all about the arts and the mechanics of making drawings that move on the theater screen…Finding that book was one of the most important and useful events in my life.”

Walt Disney’s daughter, Diane Disney Miller, wrote the biography The Story of Walt Disney (1957).  In it, she incorrectly referred to Edwin, the author of Animated Cartoons, as “Carl Lutz.”  Subsequent writers who referenced Miller’s book continued to propagate the error.  Also, the 1920 edition of Animated Cartoons published in Britain by Chapman & Hall incorrectly shows the author as “F. C. Lutz.”  Perhaps there was an illegible copy of the book and the “E” was read as “F” and the “G” was interpreted as a “C.”

Edwin autographed this first-edition copy of Animated Cartoons for his nephew, Royd C. Lutz, one month after the book’s publication.

Edwin passed on an interesting piece of history, which was found in the family’s copy of Animated Cartoons.  Tucked between the opening pages of the book was  a short note typed by Edwin, accompanied  by a short clip of a 35mm motion picture film.  The note summarizes a visit with Winsor McCay on November 14, 1921.

McCay was a renowned cartoonist/illustrator and a pioneering animator.  He claimed to have been the first to make a real drawn animated film, called Little Nemo (1911), which was based upon his famous comic strip published in William Randolph Hearst’s The New York Herald.  McCay gave Edwin a piece of the main title sequence of the film, measuring roughly 6″ x 1 1/4″.  (If you are interested in watching Little Nemo, visit the Filmography section of Wikipedia’s article on Winsor McCay.)

If you have thoughts to share about this very interesting piece of animation film history, please feel free to post them on the Comments page.

© 2017-2018 Frank F. Lutz, all rights reserved.  Unauthorized use and/or duplication of this material without express and written permission is strictly prohibited.